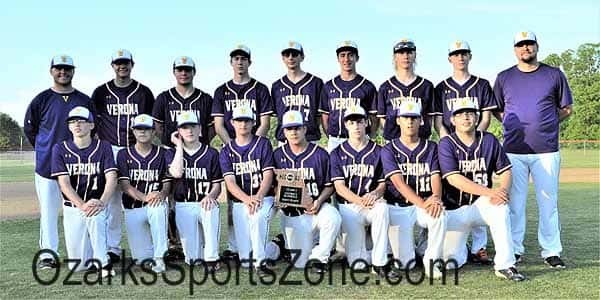 The Verona Wildcats downed the Exeter Tigers 12-2 in Hurley on Wednesday afternoon to capture this year’s Class 1 District 5 Baseball Championship.

The victory earned Verona, which has won only 11 games over the past five seasons, it’s first ever district title.

“These kids are special, they work hard and they get after it,” said Wildcat head coach Fred Lundien. “Right now I’m very happy with the way our kids are performing. Basically these kids have all bought in to what we’re doing and because of it we’re playing very well.”

“Our kids are both conference and district champions for the first time in the history of our school,” said Verona assistant coach Ethan Moffitt. “For them that’s very special. It’s something they’re going to remember for the rest of their lives.”

After jumping out in front of the Tigers 2-0 in the bottom of the first Verona struggled somewhat in the second and third, an inning that saw the Tigers push two runs across plate to even the score up at 2-2.

The third inning proved to be a wakeup call for the Wildcats though who went out in the bottom half of the frame to score five times and regain the lead at 7-2. Verona crossed the plate three more times in the fourth and once in both the fifth and sixth innings on their way to the 12-2 win.

“I think Exeter’s tying of the game in the third proved to be a good thing for us,” said Lundien. “We need to see more situations like that. But our kids are a resilient bunch. They tend to jump out in front, allow a team to get back in the game and then take off to grab the win.”

Verona hurler Kolton Pinkly stymied Exeter’s hitters throughout the game. The hard throwing right hander gave up just four hits, struck out thirteen and walked only two in leading the Wildcats to the victory.

However Pinkly did get relief, with two out in the sixth inning, from Caleb Hillhouse who closed out the game with a strikeout.

“Pinkly did a great job on the mound for us today, just like he has all year,” said the Verona head coach. “But we have to give coach Moffitt credit for that. He works with our pitchers and catchers and he put a good game plan together for us today. Caleb did a good job of closing out for us also.”

“Kolton, with 12 strikeouts, did an outstanding job,” Moffitt said. “He got us off to a good start. He’s thrown well for us all year, as has Caleb and Dillin Shrum. They’ve all played a major role in the success we’re enjoying this season.”

Verona collected 12 hits in picking up the win. Leading the way at the plate for the Wildcats were Pinkly, who went three for three with two singles, a double and four RBI’s and Hillhouse who went three for five with an extra base hit double.

Swinging the big bat for the Tigers was Jacob Foster who finished out the day at a perfect two-for-two.

The Tigers, who finished second in the district final for the second time in two years, will now look to next season.

“We had a lot of young kids on our roster this year,” said Exeter head coach Matt Tripp. “They all learned a lot this season though and after getting through a few rough spots on our schedule they settled down to play some pretty good ball. I think next season our kids will come back with a renewed commitment for another run at a district title and trip to the state playoffs.”

The Wildcats will now move on to sectionals where they’ll take on District 6 Champion Walnut Grove on Monday May 20.